On-the-spot fine for breaking lockdown rules in Mackay - As millions of south east Queenslanders spend their fourth day in lockdown, police warn travellers returning to regional towns from down south that ...
Drive-through jab clinics may join rollout - Stadiums and shops could be the next frontier of Australia's coronavirus vaccine rollout, with a plan to administer drive-through jabs being weighed u ...
Households urged to complete census early - More than a million Australian households have completed their census forms, six days ahead of the official national headcount.
Clermont’s new councillor vows to fight for jobs - Carolyn Moriarty is the new councillor for Clermont. Passionate about employment, the new Division 6 councillor is hoping to be part of the jobs so ...
Uncontrolled blaze forces residents to evacuate at The Leap - Five homes at The Leap have been evacuated as a &ldquo;precaution&rdquo; as fire rips through thick terrain in a difficult to reach area. M ...
Calls to help find missing man from Bowen - Update: The 27-year-old man reported missing from Bowen has been located safe. Bowen police are seeking urgent public assistance to help locate 27- ...
Queensland deals with biggest outbreak since first Covid wave - Queensland has recorded 19 new cases of coronavirus overnight with 17 of those locally acquired. One of the new cases includes a fully vaccinated r ...
Any information vital to help crack missing person cases - We're being encouraged to report any information we might have about a missing person to police. That's the call from authorities this Nationa ...
Covid-19 lockdown disrupts Mackay's sports fixtures - South-east Queenland's Covid-19 cluster has impacted Mackay's local sporting teams. Mackay Cutters were scheduled to to play the Ipswich Jets in th ...
Landcruiser nicked while owner slept in nearby caravan - A white Toyota Landcruiser has been stolen from an address in Bakers Creek. It happened at around 2am this morning. The resident of a carav ... 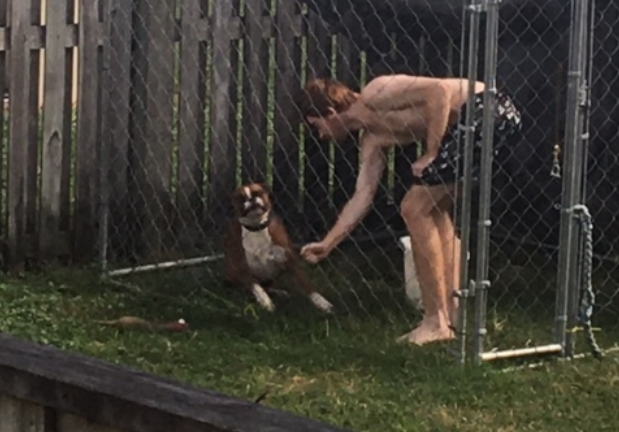 A disturbing video of a Mackay man hitting, kicking and spitting on a pet dog in a "punishment pen" has emerged.

The video, filmed by a neighbour, zooms in on Tyler Jay Halliday as he threatens the dog - named Sprocket - with a fist.

The then 21-year-old can be seen kicking Sprocket in his face as he cowers and curls up in the corner of the cage.

Halliday then strikes Sprocket in the face, before spitting at him.

The video had been used as evidence in the Mackay Magistrates Court in April this year, where Halliday pleaded guilty and was banned from owning any animals for the maximum five years.

When an RSPCA Inspector visited the home in Blacks Beach on the day of the incident in April last year, they heard Halliday had been angry at his partner's dog for digging holes in the backyard.

He told the Inspector he "would smack him [Sprocket] on the nose if he dug a hole, but not flog the absolute sh*t out of him as people keep saying".

Sprocket was seized by the RSPCA and taken to a vet.

He was returned to Halliday's partner after she informed the Inspector the pair had broken up and were no longer living together.

In an interview with the RSPCA Inspector a week later, Halliday said "he should never have done it in the first place" and Sprocket "should not have gone through that".

As well as being banned from owning any animals, Halliday was also ordered to complete 100 hours of community service and slapped with fines close to $1,800.